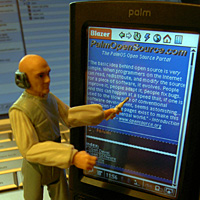 Last week I got a Palm TX, a new model released in October. You can check the Palm site for full specs, but for those familiar with preceding models the highlights are: 320x480 screen, non-collapsing case, built-in WiFi, and a $299 suggested retail price.

Some context: I've owned about a half-dozen Palm devices, and these comments are aimed at long-term users like me; the TX is replacing a Tungsten T, so this is also my first exposure to the 320x480 screen; I bought now rather than waiting for the elusive Cobalt because my T was at the end of its useful life.

So, while they don't quite amount to a full-blown review, here are my notes after a week of light use.

I like it a lot. Palm aimed for the middle, making a $300 device (which can be had for about $250) instead of a $500 device (like my Tungsten T, which thankfully I bought used on eBay for a fraction of that). I think it was a smart move on their part and I hope sales show that other people agree.

I hope to get two solid years of use out of the TX. At that point I will spend $200 on a phone/media player/organizer/camera/GPS/taser the size of a business card, which within a week I will have accidentally thrown into the paper recycling bin.

I'm looking forward to writing one of my terminally candid eBay descriptions for my weathered, battered Tungsten T.

Some related posts: The iPhone keyboard doesn't suck • iPod touch: one week down, one week to go • A farewell to Palms (hello, iPod touch) • The Palm Foleo • Widescreen as Tallscreen • Evolving a new keyboard