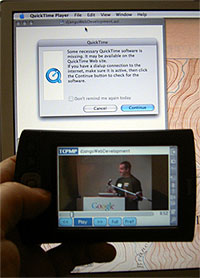 So the other day I downloaded a talk from Google Video for offline viewing/listening. (It's by Jacob Kaplan-Moss, one of the lead developers of Django.)

I have a Mac, and Macs are great at video and stuff! Not like those dumb old Windows computers!

No go. QuickTime (version 7.0.4, the latest) can't do it. Twice it gives me an error dialog saying it doesn't recognize the file type, forwarding me to a stupendously useless codecs page on the Apple site; twice it ignores the video track but manages to play a squeaky, choppy version of the audio.

It's an .avi file, but my understanding is that AVI is a wrapper format, so who knows what it really is inside that wrapper. The point of this story is, in fact, that I don't give a crap. I just want to play it!

So, just to see what would happen, I copied the file to an SD card and put it in my Palm TX. I launched TCPMP, an open source audio/video player. I hit play. No problem. I listened to the whole thing while driving back and forth to work.

I'm sure there's some mind-numbingly reasonable technical explanation for this. But that doesn't mean it's not stupid.

You installed TCPMP on your Palm; install VLC on your Mac.

And mentioning it only as an aside doesn't make the comparison right.


You must have slipped in while I was making my final edit that mentioned VLC (because I knew somebody was going to say "Why didn't you just use VLC?").

The point of my rant is that Apple's premiere multimedia technology, which has been in development for something like 15 years, couldn't play this file.

The fact that VLC plays it too just adds to Apple's shame!