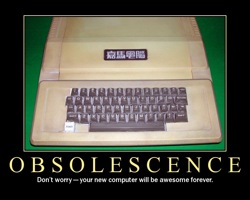 With the help of Flagrant Disregard's "Motivator" maker and a photo from Wikipedia, I've produced this little poster to get you pumped up for your next big computer purchase. (Here's the full-size version.)


Please may I use yoour obsolescence "motivator" image for a press article I am writing. If you are ok with that would you want us to reference you in anyway? Thanks in anticipation. For information I represent the Component Obsolescence Group www.cog.org.uk


Ian, by all means, use it! Thanks for asking.