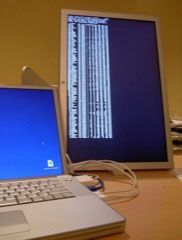 A little-used new feature in the Displays preference pane in OS X 10.4 is rotation in 90-degree increments. I tried this feature out with the 20-inch Cinema Display on my desk. Novel -- it took me back to the old grayscale Pivot I wrote so many columns on in the '90s. A base that handled rotation would make it nicer. Also, the type and other elements onscreen just don't look as good at 90 degrees -- I don't know if it's the disparity in vertical and horizontal viewing angles, or maybe a change in anti-aliasing behavior. (Onscreen is top running in Exterminal.)

Some related posts: The iPhone keyboard doesn't suck • iPod touch: one week down, one week to go • What is the iPhone running, really? • Palm TX: First Impressions • Evolving a new keyboard • NetGrowler


The degradation in quality is probably due to the fact the RGB pixels are now horizontal and not in the orientation the antialiasing algorithm (which does sub-pixel smoothing) expects them to be.


I use Viewsonic VP2030b and VP201b in vertical orientations and the results are excellent. It's great for editing and viewing web pages.