OSCON ends with a half-day that goes by all too quickly. Below are some notes from those final few hours.

During the Keynote segment Nat Torkington cracked everyone up with an omnidirectional roast he called Open Source Therapy. He described imaginary family therapy scenarios in which Mom and Pop are working out their problems with their various open-source-project kids. The only one I wrote down was about Python: "Mom and Pop wish Python would get drunk, get laid, and lighten the fuck up!"

Incidentally, this was Nat's last hurrah as OSCON impresario and emcee. I caught him at one of the buffet tables afterward to thank him for all his hard work, and asked him what he's going to do next. It's either secret or he really doesn't know yet. Though since he lives in New Zealand, it may involve sheep. Or Perl. Or both.

Turning a plotter into a shooting range, modifying an "Operation" game board to gush simulated bodily fluids, blowing up power supplies, making Pong controllers out of high-heeled leather boots, and building a 30,000-volt test of manual dexterity. James Larsson's dry wit was the perfect accompaniment to his videos of outrageous hardware hacking adventures. It brought me back to being ten years old and taking apart walkie-talkies and remote-controlled cars. Only I never was able to put them back together into anything nearly as interesting. You really had to be there to appreciate this one. I didn't see any disclaimers saying "don't try this at home", so maybe I'll try it at home. Right after I build myself a fireproof shop.

Wesley Chun, author of Core Python Programming, gave a talk about his experience developing applications in the medical arena using open-source software, especially Python. As promised, we learned a bit about the human spine as well.

He also spent some time talking about the special pains of developing software that's heavily impacted by federal regulation. For instance, the FDA can pop in at any time, unannounced, to demand documentation, patient records, etc. -- even for old trials or systems. One audience member pointed out that this was a selling point for open source in their organization, because in some cases supporting proprietary legacy systems (in order to maintain the federally mandated access) is impractical or impossible.

During his talk I was also thinking about parallels between the medical imaging arena and the more mainstream photographic industry that I'm familiar with. The makers of digital cameras and backs have moved very slowly to open their devices and file formats. I always assumed that creating lock-in was the primary reason for this, and while that may be true, Wes also pointed out that there seems to be an inverse correlation between the openness of a platform and its cost. Linux has made huge inroads largely because of the availability of cheap hardware. It will be interesting to see if this plays out in the photographic world -- for instance, will we see cameras that only shoot open formats (PNG, DNG) and have reprogrammable firmware?

That leads nicely to the next session I attended...

Open source hardware emerged as one of the more interesting bleeding-edge topics this year. Challenging definitions, uncertain business models, relative obscurity, high geek interest -- all the hallmarks of the Next Big Thing.

This panel discussion opened with a 1999 Richard Stallman quote to the effect that freedom to copy hardware is not as important as the freedom to copy software, because copying hardware is hard. Though they suggested that even he may feel differently today, I wouldn't say the point was entirely refuted. The two areas are qualitatively different -- which is one reason why the concept of open source hardware (three words I keep wanting to put in scare-quotes) is interesting to explore.

They pointed out that the open source hardware can be seen as a layered system and that each layer has different licensing concerns. Those layers include physical design, schematics, parts lists, layout diagrams, firmware, software, and APIs.

The language of software licenses can be hard to apply to hardware. Some alternatives in use are Creative Commons licenses, the TAPR open hardware license, and the Chumby HDK license. The panelists noted there's been a lot of activity in the last six months.

The open source community is now mature enough that a new frontier like this produces immediate interest in viable business models. Several different ones were mentioned:

If you want to learn more about open source hardware, the Daisy MP3 player project is one of the more accessible examples. Apparently it's possible to build one that plays Ogg Vorbis files too -- which seems more righteous.

In the question period I asked about patents, since the development process seems to commonly involve patenting a design and then giving others the right to use it without cost. As best as I can understand, this is a preemptive move to prevent someone downstream from taking an open design and patenting it obstructively. 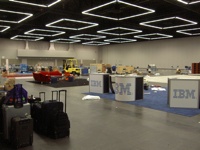 In my daily notes on days 3 and 4 I didn't say much about the trade-show floor. That's not really what OSCON is about, though I did make the rounds. I chatted with some OSU students from the Open Source Lab there. I picked up some minor schwag of the keychain variety. I discovered a very cool small publisher of digital photography books -- Rocky Nook -- and took back a sample (Fine Art Printing for Photographers) to share with my colleagues at work. I'm very impressed with what I've seen of the Rocky Nook books so far -- good content, nicely printed, and a very nice non-bloated length of 200-250 pages.

This was my second OSCON, 2005 having been my first. As before, it was an enriching, inspiring experience. I'm hoping to make an annual event, though whether I decide to attend the tutorial days again will depend on what's lined up. When first-time attendees asked for recommendations on what sessions to attend, I found myself repeating advice I first got in college (and followed only belatedly): Focus more on who is giving the talk than on what they're talking about. A good speaker can do a lot more for a (seemingly) uninteresting topic than vice-versa.

Having attended twice now, and after getting a chance to chat with a number of presenters and authors, I've even started to think about parlaying my combined teaching and technical experience into a speaking role next year. I think that would be a blast.

Alfred Nutile
Switching from OS X to Ubuntu
2064 days ago