People sure are excited about the Google App Engine. Especially people who have some other favorite language besides Python. A significant number of the issue tracker items are of the form “Please add support for $MY_LANGUAGE”, where $MY_LANGUAGE might be VB.NET, C#, PHP, Java, Groovy, Ruby, Perl, etc. ad nauseam.

I’m not going to comment on the language-wars aspect.

But if you want your language supported (this goes for any issue in the tracker in fact), the thing to do is not to go to one of those issue pages and add a comment that consists of “+1”. (“DUGG!!” is also not recommended.) That sends an email to everyone who has “starred” the issue. An email that consists of “+1”. With your name on it.

The right thing to do is star the issue yourself. Notice that in the list of issues, there’s no column that lets you sort by number of comments, but that the list defaults to sorting by the number of users who have starred it. That’s a hint from Google.

A hint that some people have had a hard time taking… 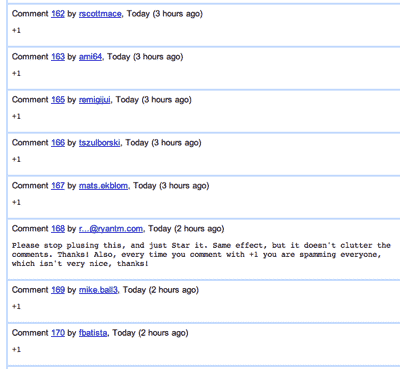 It’s pretty widely known that Google has four “official” languages internally: Python, Java, C++, and Javascript. I presume that a lot of the Python infrastructure in GAE is stuff that Google created for their own use. A corollary of this presumption is that the next GAE-supported language is going to come from that list. And it’s not going to be C++.

It would be cool if the next language to be added was not a language per se, but broad support for the JVM and languages that live on it – Clojure, Scala, Groovy, Jython, JRuby. That would shut a lot of people up make a lot of people happy, and be technically cool as well.

(But if the next one is Javascript, with Steve Yegge’s Rails clone, that would be interesting too!)

Incidentally, the Rails clone is actually written on Rhino, for the JVM.

What’s really awesome about the appengine community: not only +1’s, but people are replying to things on the mailing list with just “bump!”