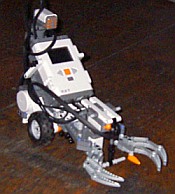 I was able to stop by Holocene this evening for the first half of FOSCON III: Really Radical Ruby. Those crazy kids. The event was sponsored by SQKWZR, which the two founding scientists/emcees claimed was fake – but you know they’re just saying that to keep people from stealing their ideas.

I saw five 10-minute-ish lightning talks before I had to leave and get my beauty rest. Here’s the gist. My apologies in advance to anyone whose presentation details, name, or affiliation I bungle:

Hi. The Lego Mindstorms robot was ours. The person who programmed it is Eric Pugh.

Hi Jason, thanks for the info. That was one cool demo!