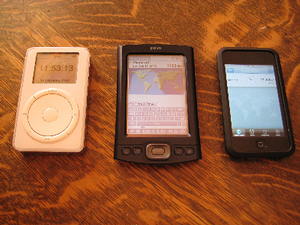 I bought my Palm TX in December 2005, a few months after it came out. In my blog post where I weighed the pros and cons of the device and the platform, I grumbled that “Palm has successfully crushed any optimism I might have had for fixes appearing in the form of a free, downloadable OS upgrade.” My grumpy intuition was right – in fact, the Palm platform has pretty much just stagnated since that time, punctuated with spastic feints toward Linux that you can read about elsewhere or in my old Palm-related posts.

The digitizer on the TX long ago went south, and I’ve been looking around for a good replacement. This is tough because PDAs aren’t a very lively product category these days – most people use their phones for that stuff. After a lot of obsessive research I boiled my choice down to two very different devices: the iPod touch and the Nokia N810.

I chose the iPod in the end because I decided that my priority was to use the thing. In recent weeks I had taken to listening to audio on the old first-generation iPod from my “museum” and really appreciated its elegance and functionality – not to mention the way Apple was still supporting it seven years after its debut.

So, as alluring as it may be to think about buying the Linux-powered N810, writing my own custom GTK apps in Python on a computer the size of a candy bar that has wifi, bluetooth, a camera, and a butane brazing torch, it wouldn’t be a very wise use of my time and energy these days. So in a betrayal of my open source DIY ethics I went for the device that prioritizes usability over hackability.

Summary: The iPod touch is excellent. I love it.

One nice thing that it inherits from the Palm is that it is fairly successful at making you forget about files, folders, and documents. I like that. It kills me when I see people re-creating our fussy, crufty desktop environments in miniature on handheld devices.

People who know how hard I can be on my hardware will be happy to know that the young man at the Apple Store was nice enough to apply my screen protector and cover, so the thing hasn’t been exposed to the elements or my weird corrosive body chemistry.

It’s not perfect. I’d like a to-do list app, an outliner, copy and paste, an offline document reader, support for Ogg Vorbis and other open media formats, a portable folding keyboard. And a shell, dammit.

I gather that a lot of the above can be gotten by “jailbreaking” the device and fishing around for third-party apps, but since I’ve had it less than 48 hours I’m not quite ready to risk bricking it. I am optimistic (perhaps foolishly) that Uncle Steve is going to make good on his promise of an SDK this month. Even if I don’t have time to play with it right away I trust it will yield a lot of cool stuff.

The great thing is, you don’t have to “fish” around for apps at all once jailbroken. You get a nice little app with a nice organized list of applications to install and an easy way to keep up to date on all of them. I’m not saying go jailbreak your iPod Touch, but as someone who’s been jailbroken for a while now, it’s worth it. However, I suspect that when the SDK is released, most of the apps I’ve been using (to-do list is the best example) will be ported and released legit. Though, I have been reading a few rumors that seem to indicate that all apps will have to be released through the iTunes store, which would make me a bit angry.

It is sad to see what has become of Palm in the last couple of years. Palm used to be an innovative company. Now? Not so much…

I finally dumped my Treo for an iPhone and have been pretty happy so far.