I’m still loving my iPod touch. It’s really a great little handheld computer. I’m able to do almost everything I need with the stock apps, but there are a couple free third-party apps that have earned a permanent place on it. One is the game Chess With Friends from NewToy. 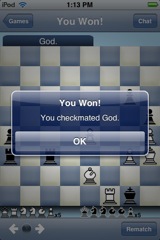 This is a version of what is also known as “postal” or “correspondence” chess. You make a move and send it to your opponent; your opponent makes a move and sends it back to you. (In this version, the CWF app rather than your mail carrier is the middleman.) You can pick somebody out of your address book, or ask the CWF app to find you a random opponent. Nice touches include in-game chat, step-by-step replays, and optional email or SMS notifications.

The human angle is what makes it fun. Most chess players have been periodically disheartened by computer opponents that beat humans (those who play at a mortal level like I do, anyway) coldly, soundly, and rapidly. The variety of human players that the CWF random-opponent feature delivers is a welcome change.

You get to pick your own screen name. People who know you can search by this name if they like, so it serves a useful purpose in addition to being a nametag. It also is occasionally the source of some amusement, as in the screen capture included here from the end of a recent game.

Hey, I’ve have some Chess With Friends games going for months now, and it’s one of my favorite things about the iPhone. Let’s play! Drop me a line with your contact info so we can get it started, if you’re interested. (You will probably beat me.)