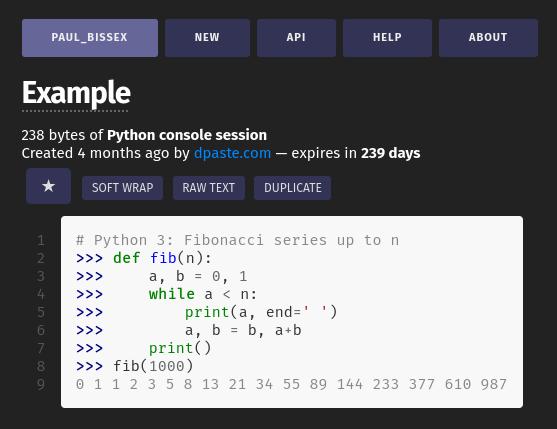 In July I deployed a major update to dpaste.com. Nothing exploded. Good things resulted.

It looks different of course, but here’s the other stuff that’s new:

I also moved my project hosting from Bitbucket to Sourcehut, driven by my need for Mercurial support. See my Transit of Mercurial post for more on that.

I like that it’s an open source project. I hit one error in the system early on, and reported it. I soon received an email notifying me that the fix had been deployed, with a link to the patch.

Another milestone: I’m no longer self-hosting. For many years I’ve used a FreeBSD VPS for hosting all my projects. One by one I’ve been porting them to more suitable lower-maintentance platforms (this blog, for instance, is now served from Azure static storage).

After surveying the current Python-web-app hosting options, I chose PythonAnywhere. It provides the pieces I need to deploy my production Python web app, but doesn’t make me manage them like a sysadmin.

I can still SSH to the server to run management commands or do hot fixes, but I don’t have to think much about the platform itself.

Having previously been the target of a DDoS attack, I did initially balk at giving up access to the web server configuration (for more efficient blocking than you can do in the application layer), but that’s one of the only things I’ve pined for.

I traded the freedom (and burden) of running and maintaining everything myself, for the ability to focus only on building the application. That’s been great.

The update has made it easier (and more fun) to work my way down the to-do list. Features in the queue include API auth, syntax-coloring improvements, and syntax-guesser improvements. Watch the status feed for news.