The format is (mostly) half-hour talks from attendees on whatever subjects interest them – as long as other attendees have also expressed interest. It’s all tracked on a big board in the lobby. So far I’ve been in discussions involving localization, designing for technophobes, cloud computing, physics simulation in games, and Lisp. The level of interactivity is high – as is the collective expertise brought by the participants. 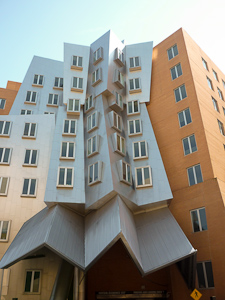 This is taking place in MIT’s Stata Center, a wild-looking Frank Gehry creation that clearly houses a lot of fun regular old MIT stuff in addition to transient visitors like us. Walking down a side hall during lunch I peered through the glass of a closed door into a large office containing a pile of what looked like robots.

Update: In BarCamp spirit, I gave a talk. The title was “Moving from PHP to Django”. Much like some of my earlier blog posts on the subject, I talked about how to make the transition from PHP to Python/Django smoother and more enjoyable. At the end, I noted that I had two copies of our book on hand. I made a special offer: buy one (at a great discount price, in fact) and I would donate the proceeds to BarCamp. I had two takers and made my donation immediately after. Thanks, guys!