This week is so busy that I don’t have time for a longer post, but I wanted to mention DjangoKit (attentive readers may have already spotted it in the sidebar), an OS X application wrapper for Django projects. Tom Insam went and did something that I’ve had on my “someday” list for a long time. It’s very much a 0.0.1 project right now, but I think it has great potential as an application testbed and as a platform for hybrid apps. 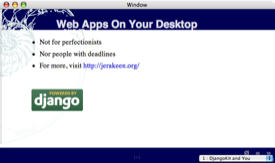 I pulled out an unfinished Django app of mine that lets you build and present S5 slideshows, and shoehorned it into the DjangoKit wrapper. It works! I can’t ask for more at this point. Looking forward to having more time to play.

Oooh – I’m looking forward to playing around with this.

This is not entirely related to your post but the S5 screenshot made me think it might apply.

The idea is simply this, you can edit the content of any page on that site and push a button to generate S5’s or anything else you might think of.

oooh, I’m impressed. Someone actually downloaded my awful source code, figured out what I was thinking, changed the right bits and shipped their own app.

DjangoKit has had a bad last week, due to an unanticipated coffee/laptop interaction incident, but I’m able to work on it again now…

I’ve been tinkering with the source and slimmed it down some and expanded some things, when i’m complete i’ll post it.

I assume you’re talking to Tom there (it’s his code). Seems like there’s going to be enough interest in this thing to make it a bonafide public project – if Tom’s amenable.

That looks to be very promising.